But is religion-based hate speech a new phenomenon? No. It has been happening even before the internet came into existence. It has long trajectories through time, places, and actors. It has been there, but at certain times it escalates.

In the current moment, governments and technology companies continue to fail to address hate speech and in fact profit politically and economically from the vitriole, violence and attention that it attracts. It is in this context that people, and especially women and LGBTQI+ people have themselves evolved responses and ways of hacking hate. This edition explores how we hack hate, through love, humour, compassion, fighting back, silence and do so in a variety of forms - through podcasts, analysis, illustrations and so on.

Include at FPI :
Don't
END_OF_DOCUMENT_TOKEN_TO_BE_REPLACED

The internet is a space for dissent and democracy but there is no doubt that it has also given space and amplified religion-based hate speech against communities and people. In this editorial Dhyta explores what is hate and what is hate speech, the failure and profit for the state and technology corporations to not address hate speech or to hold anybody accountable, and finally what are the ways that people and communities themselves are doing about the hate speech and trauma they face, often on a daily basis.

END_OF_DOCUMENT_TOKEN_TO_BE_REPLACED 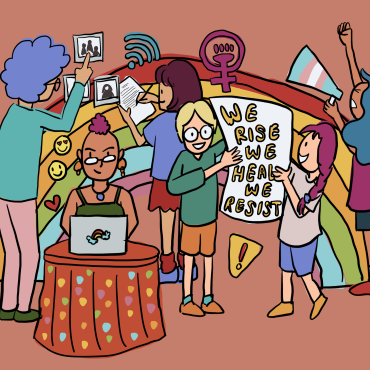 We Rise, We Heal, We Resist

Indonesia has celebrated gender diversity even before the country's independence. This is indicated by the existence of five genders in the Bugis (South Sulawesi) tradition, namely: Makunrai (female), Oroane (Male), Calabai (Male with women soul), Calalai (Female with man soul) and Bissu. During the Old Order in Indonesia, some of these groups were targeted, and in the contemporary, there are still remnants of how people are denied freedom of expression around sexuality, and face hate and repression.

END_OF_DOCUMENT_TOKEN_TO_BE_REPLACED 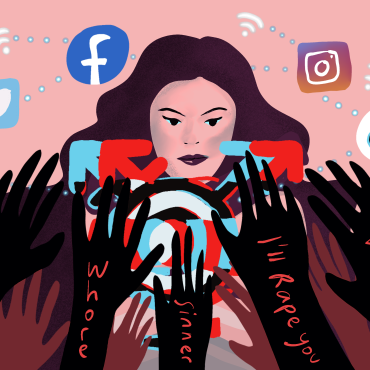 Misogyny as a commodity in digital spaces

Violence has a way of manifesting itself across different platforms – SMS, Zoom, Telegram, Facebook including the newly emerging platforms like Tik Tok and Clubhouse. The problem, therefore, lays not merely in the technology itself, but the underlying logic and profit model that propels the modus operandi of the algorithm, the content moderation policy and all other technologies deployed to run the digital ecosystem.

END_OF_DOCUMENT_TOKEN_TO_BE_REPLACED

Despite a boom in dating apps geared towards Muslim community, expectations of “morality” from Muslim women makes dating, and particularly online dating, a daunting experience. This comic strip explores how women are blamed for the intimate partner violence while they also face a barrage of abuse, and adds a layer of religiosity to the discussion that sets strict moral grounds only for women.

END_OF_DOCUMENT_TOKEN_TO_BE_REPLACED Understanding Hate and Hate Speech: What does it mean for women and other oppressed groups?

Living under constant fear of being targeted with religious hate and hate speech is a shared experience of Sri Lanka’s Muslim community. In this podcast, journalist and researcher Sara Pathirana talks to Sheikh Arkam Nooramith – a Sri Lankan Islamic scholar, and Ms. Hafsah Muheed – an experienced professional working on gender-based violence and women’s health, about how the community deals with threats by focusing on the message of peace and love.

END_OF_DOCUMENT_TOKEN_TO_BE_REPLACED 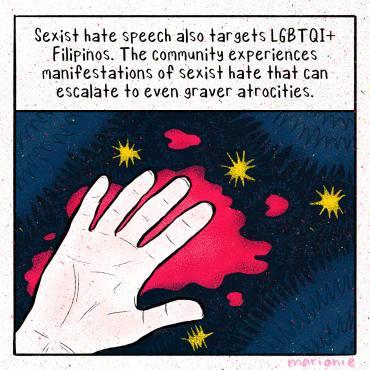 Hate Speech in the Philippines

Gender-based violence is prevalent in Philippines, and it is targeted towards young girls, women and LGBTQI+ communities not just in public spaces by state leaders and known individuals, but also in more private online settings. Impunity in many cases have only enabled perpetrators to continue the violence. This set of comic strips highlights different kinds of gender-based hate speech in the Philippines, and emphasises on collective efforts to fight back.