Gender peripheries of the Internet Governance Forum in Latin America

The Sixth Regional Preparatory Meeting for the Internet Governance Forum that took place in Argentina at the end of August showed that women are making headway in the Latin American forum. The involvement of young women in internet governance discussions added a diversity of perspectives. Coming largely from the technical and free software movement and the civil and digital rights arena, they also provided interesting input to the multistakeholdering debate.

Even though there was a lot of interest around internet and human rights, privacy and security, and freedom of expression, one discussion that was absent was on gender analysis. Gender was programmed as a cross-cutting issue but, in practice, it was extremely difficult to have in-depth gender analysis across all the issues being debated.

GenderIT.org gathered some reflections on the event from members of our team at the Forum, hoping to make gender analysis more than a peripheral issue in this regional arena.

END_OF_DOCUMENT_TOKEN_TO_BE_REPLACED

Let's go beyond the basics: What would feminist internet governance look like?

flavia
Feminism is one of the most important movements in the recent history of humanity, if we measure its political impact, the level of its theoretical proposals, and its ability for social articulation and mobilization, It has permeated the debate, analysis, activism, and development of public policy in critical areas like the economy, culture, health, and education, among others. Nevertheless, when it comes to internet governance, a gender perspective has rarely been considered, although the internet has become an essential element of almost all spheres of people's lives. In Latin America a regional policy dialogue on internet governance has been held annually since 2008. Since it began, various stakeholders in the region have focused on analyzing the relevant issues of internet governance, reviewing its impact on Latin American countries, and developing perspectives on internet policies, rules, and mechanisms for access, use, evolution, and management. Over the six years that these regional meeting have been held participants have identified the need to mainstream the gender perspective throughout discussion of topics on internet governance. However, issues such as the as real and substantive participation of women in the development of global, regional, and national internet policies, and the impact of internet access and use on the exercise of women's rights have not been systematically addressed.
END_OF_DOCUMENT_TOKEN_TO_BE_REPLACED 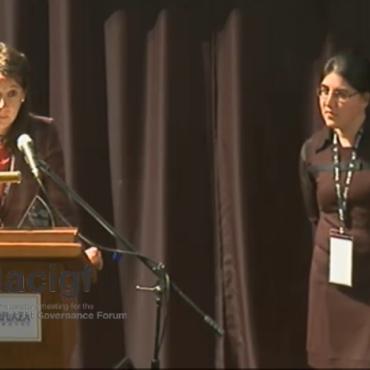 Let's talk about gender analysis in the LAC IGF

flavia
The APC Women's Rights Programme attended the preparatory meeting prior to the Latin American Internet Governance Forum held in late August in Córdoba, Argentina. Attending were Erika Smith, Dafne Sabanes Plou, and Flavia Fascendini. The Spanish language editor of GenderIT.org interviewed both feminists to analyse whether the internet governance debate still marginalises gender issues, or if they have truly become cross-cutting.
END_OF_DOCUMENT_TOKEN_TO_BE_REPLACED "We have to respond to discriminatory discourse with more discourse": Natalia Gherardi on symbolic violence

flavia
Mother and wife, housewife, caregiver, submissive, fragile. Or bad, crazy, bitch, witch. All are sexist gender stereotypes that speak to what, socially and culturally, a woman is considered to be, or not be, and what she should, or should not, be. How do we dismantle this sort of invisible violence? How do we challenge discriminatory gender stereotypes and label them publicly as being negative, when they are not visible, when they are presented as natural? And how do we respond to this sort of violence that happens both online and circulates in traditional media?
END_OF_DOCUMENT_TOKEN_TO_BE_REPLACED

Freedom of expression, the role of intermediaries, and misogynist hate speech: Security in exchange for rights?

erika
The Latin American Regional Forum on Internet Governance was held in August, and brought together internet experts from government, business, and civil society. As a feminist from Mexico who documents cases of technology-related violence against women, the debates on freedom of expression were of particular interest. I took the opportunity to interview representatives of free speech and digital content from the freedom of speech organisation Article 19 - with different perspectives from Brazil and Mexico, as well as views of other experts on the subject.